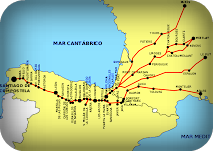 Places visited “making The way”  were from Lugo to Santiago-Compostela.
Lugo was founded by the Celtic Inhabitants who called the town “Lugos” meaning a pan-Celtic God of light.Later, the Romans settled down in year 25 B.C. and called this location “Lucus Augusti”
During the Middle Ages was a center of pilgrimage, due to its Cathedral with the consecrated Host.Lugo is the ONLY city in the world to have a completed Roman walls Circle around the old part of the town. These walls cover  2 kilometers around the old part of the town.There are 71 towers and 10 main gates in and out of the town. This is a Roman Construction remains a Treasure protected by UNESCO.
This town has nearly 100.000 inhabitants and is 465 meters above sea level.His main town Patron Saint Froilan in October the 5th.
Places visited with the Clients: the Roman walls, the Roman bridge, over the Minho river and walks down town. There we tried some typical dishes like ” Pulpo afeira, caldo gallego” and as dessert: “filloas”(made with pigs blood). We also had some other good and wide range of fresh fish which this region of Spain offers.
Santiago de Compostela:originally a “Suevos” settelment.Was followed by the colonitation of the Roman Empire and later invaded by the Arabs though for a short time.The town´s name comes from the Latin “Sanctus Lacobus, Compositea Tella”: Saint James.The origin of the city is due to the Shrine of Saint James the Great, now in the city´s Cathedral.The Medieval Leyend says that the remains of Saint James Apostle were  brought here for burial in year 813. The kingdom king at the time “Alfonso II ”  was informed of it. Then he decided to construct the existing cathedral in the same Site. Since then It has become for many centuries one of the 3(Palestine,Rome and Santiago) most important Christian pilgrimage Destinations. That is , a catholic and christian Pilgrimage Destination which started in 9th century and keeps going on nowadays. In 1985 The UNESCO declared the town Cathedral a World Heritage Site.
Around the main square are other important historical buildings like “Reyes Catolicos, Parador “, Raxoi´s Palace.The towns University was founded in 16th century.
Along the narrow stone old town streets takes places a vivid entertaiment day and night life, in a town with around 100.000 inhabitants.Therefore, i went with my clients along some of these narrow streets where there are many restaurants too. As we went along they were very surprised to observe the vast variety of fish that the people were eating.So at the end of the walk we came back to the restaurant which they liked best to have dinner.They also ordered many different kinds of fish”Parrillada de Pescado” together with “Ribeiro wine.” They really enjoyed eating and drinking and got somehow a bit tipsy.Thanks God, the Hotel was nearby.