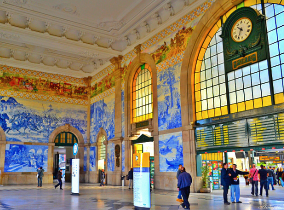 Porto is considered the second most important City of the Country, after Lisabon, in the north of Portugal.It has 2.5 million inhabitants.Located on the right side of the Duero river which ends in the Atlantic Ocean.Porto city itself has 15 districts.The south town has on one side the Duero River and the other side Vila Nova de Gaia.This town quarters are said to have a british atmosphere.Due to the establishing here the english wine traders.It is a very commercial and cultural town too. Due to that there is the following Proverb: ” in Lisabone people enjoy themselves, in Coimbra people sing, in Braga people pray and in Porto the people work.”
Historical outstanding  data:
Origin around 300 BC with Celtic Civilization settlelment.Followed by an Outpost of the Roman Empire,called at the time Portus-Cale. Later, fell under the Control of the Moors during the Invasion of the Iberian Peninsula in 711.Next in 869 Count Vimara Perex, established the County of Portugal. In 1387 John I of Portugal & Philippa of Lancaster married. This way  they established a long standing military Alliance between Portugal & England( see Treaty of Windsor).
This Treaty inspired the formation of the present NATO organization. In 14 &15 Century, Porto´s Shipyards contributed to the development of Portuguese shipbuilding.From this Port the portuguese initiated the Age of Discovery.In 19th  century was invaded by Napoleonic troops.As a result the 29th of March 1809 the local population fled trying to cross the river Douro through “Ponte das Barcas”. There were so many people over the bridge that it collapsed.Subsequently, dying thousand of them.Today there is a remembrance by a plate at the subtituted brigde ” Ponte D. Luis 1.”
The french army was rooted out of Porto by Arthur Wellesley, 1st., Duke of Wellington.
On 24 August 1820 a liberal revolution took place spreding althroughout  the Country without resistance and establishing a liberal Constitution.The King Miguel I of Portugal(1828)rejected such Constitution and as a result he was forced to resigned as an absolutist Monarch.This provoked a Civil War between 1828 and 1834.With the abdication of the king the Constitution was re-established. 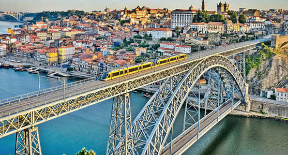