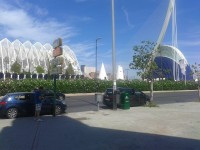 Mrs., P. Rendiles Says:
As a Present to my daughter and to some Relatives from Venezuela I planned a Trip to Spain and a Sea-Cruise to the Mediterranean Sea.The Trip to Spain  was as follows: Madrid——–Mérida——–Sevilla——-Valencia———Barcelona——and Meditteranean Sea-Cruise. As the daily distances were very long  we decided to get the opinion of our two drivers, Juan Manuel and Felix  to plan the daily visits. We arrived to Madrid at midday and we first went to make our Hotel check in. In the evening after some rest we made a night City-tour which was so beautiful and much different from the day light. Then we went to have dinner in “Plaza Mayor” where the children could move around without any traffic risk. Great choise following the drivers´ suggestions! The following day we made our way to Mérida, a most ancient spanish town with still many roman empire remains. We visited: “El Acueducto de los Milagros;”Circo Romano”; “Anfiteatro Romano”; “plaza España y Alcazaba”; “puente Romano y Rio Guadiana.” In the afternoon we departed to Sevilla quite far away. We arrived to the Hotel, had a good rest and later went for a walk  and  dinner in a good restaurant nearby the hotel which the drivers suggusted us.
Next day we made a Sevilla City-tour to ” Isla Màgica, Plaza España y parque Ma Luisa”, “Torre del Oro,Barrio de Triana,Giralda y Reales Alcazares” and we also made a horse-carrage city-tour around the cathedral and around the old City quaters.
After lunch and some rest we made our way to our Valencia Hotel. The Hotel, being in the old historical part of town was most convenient to have a night walk before we decided to have dinner. In the morning we visited: ” la catedral y el Miguelete,plaza del mercado y Lonja de la Seda;Barrio del Carmen y sus Palacios” And finally we visited “la Ciudad de las Artes y Ciencias.”
After  we met together the two vehicles groups we picked up our laguage and made our long  way to Barcelona and since we had had a long travelling day we allowed the drivers to  go early to rest and  enjoy Barcelona´s city night. The day after we made visits to: “parque Güel, Pueblo Español, Casa Batllò, Mercado der la Boquerìa and Sagrada Familia.” Then we went to the Sea-Cruise Ship in which we departed at 13:30 hrs. As we arrived to the Cruise Ship we all agreed to tip well the two drivers for having given us a wonderful Trip inland Spain.