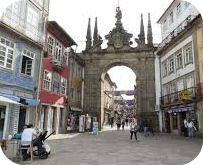 The present area of Braga was first occupied by humans already in The Megalithic Era.This is revealed by founded documented Vestiges.The Celtic civilization tribes occupied this Portugal Northern Region together with that of Galicia and Asturias of Spain.
The Romans started to take over this Area around year 136 before Christ and had all under control with Augustus Emperor.Braga comes from the Latin: Bracara Augusta,named so by the Roman Empire.For its importance, this Town in the North West of Portugal was at a time also the Centre of the Galleaecia Province.
The Iberian Peninsula was invaded by the Germanic tribes and took over this Region around year 410.Braga played  an important role in the Christianization of the whole of the Iberian Peninsula. It started already in year 135 A.D with St., Ovidius(after bishop Paternus…) and went on to the 6th Century.However, there was a break Christianization period due to the Moors invation of this Area. They were definitely repelled by Ferdinan I of Leon & Castile in 1040.
Braga was a Portugal Residencial Royal Seat from 1093 to 1147.Nevertheless, Braga did not profit from the Portuguese world Discoveries.
In the 18th., Century there was a period in which the town underwent important improvements and progress in all sectors promoted by the Archbischop of the House of Braganza.
Not far from the town there is a most outstanding Site which is worthwhile visiting. That is, the Sanctuary of Bom Jesus. This is a Notable Pilgrimage Site with a Baroque Huge  stairway that clims 116 meter high.Therefore this is one of the most important Bragas tourist attraction.It important to say that the first indication of a chapel over the hills dates from 1373. Later on, in 1629 a pilgrimage church was built over the same site dedicated now to The Bom Jesus. It has 6 chapels dedicated to the Passion of Christ.